With October now behind us, so too is my second year of Inktober – the challenge to draw an image, preferably in traditional media, every day for thirty one days.

I figured I could spend a bit of time reflecting on how well things went, especially now that I have two years to compare, while also discussing which of my illustrations worked well, and which didn't.

Overall, I think this year was less successful than last year. Certain decisions I made, as well as certain circumstances, made my thirty one drawings a little harder to be proud of. That isn't to say I'm not proud, but it's good to take some time to review what I've learnt. 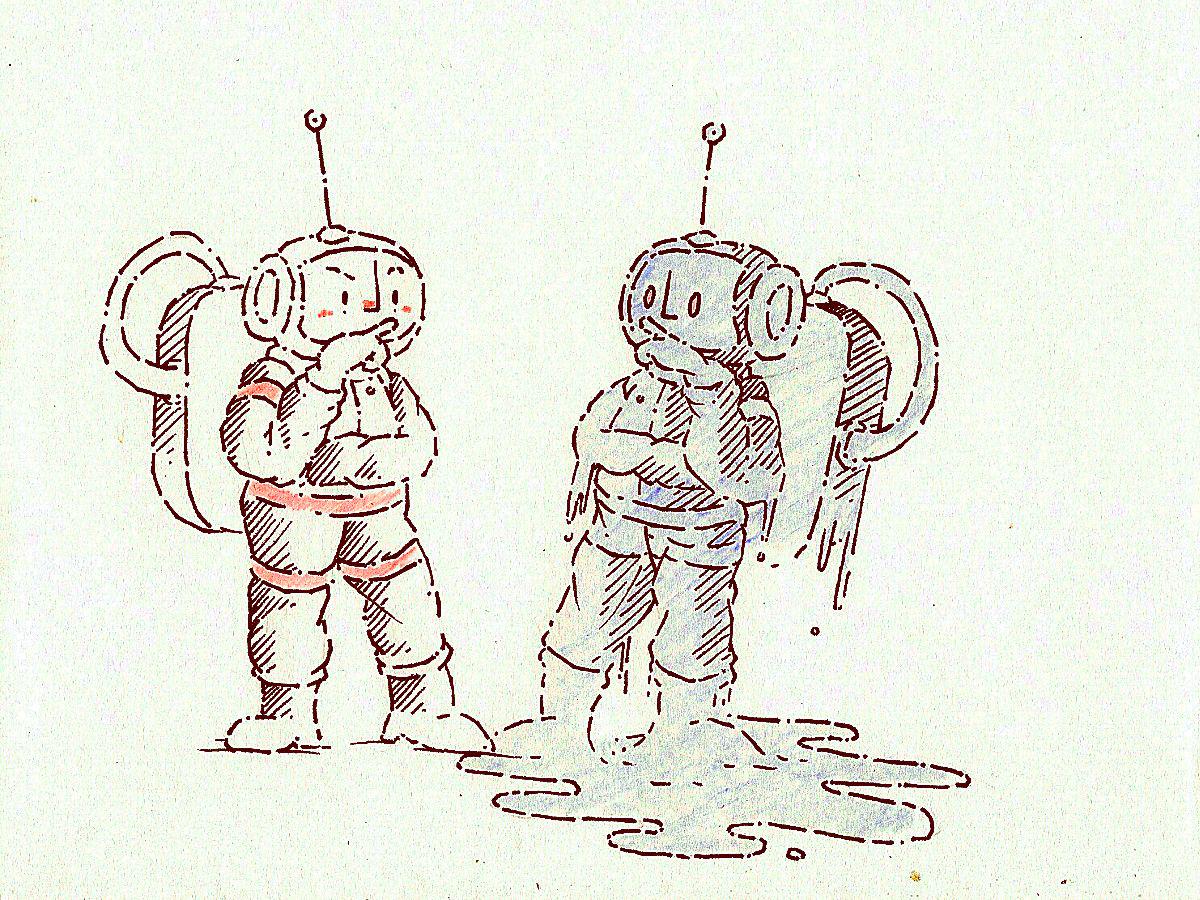 I had less time this year.

While last year I had just one interruption, I was pretty much able to draw and upload an image every day, on the day.

Coming into my second year freelancing now, I'm have more work lined up and more responsibility. While last year I allowed my inktobers to be completed in my work hours (feeling a little like Arthur Conan Doyle), this year I reserved it for out-of-work hours.

This worked fine for the first week or so, winding down with a drawing, but the novelty soon wore off (as with every habit), where it felt like I was just working late into 7-9pm sometimes, making it seem increasingly more like a chore, especially as the missed days start to stack up.

So much of inktober isn't the drawing, but coming up with what to draw. Not only matching the day's theme, but also something that looks interesting, isn't too ambitious, and is something I would actually want to draw.

I don't know how the words are chosen for the official inktober list, but having shifted away from the medieval fantasy theme of last year to science-fiction, it felt as though the words this year were much more geared toward the former.

A fun challenge at it's best, but unfortunately an extra hurdle at it's worst.

I didn't properly consider the addition of colour.

This is possibly the most important. I wanted to add an extra element to my illustrations this year, so I decided to pick up a red and blue pencil originally with the intention to add very subtle coloured highlighting.

Without making any kind of rule as to what would be and what wouldn't be coloured, I was experimenting on the fly, and quickly forgot any kind of original guide.

It wasn't until around #20 that I realized using the blue for shading didn't translate too well from pencil to screen, and I should have been using the blue tones and the hatchings to compliment one another, instead of using them in unison.

Once I tuned down the colours, and just used them to highlight important elements, I think the images were more successful. 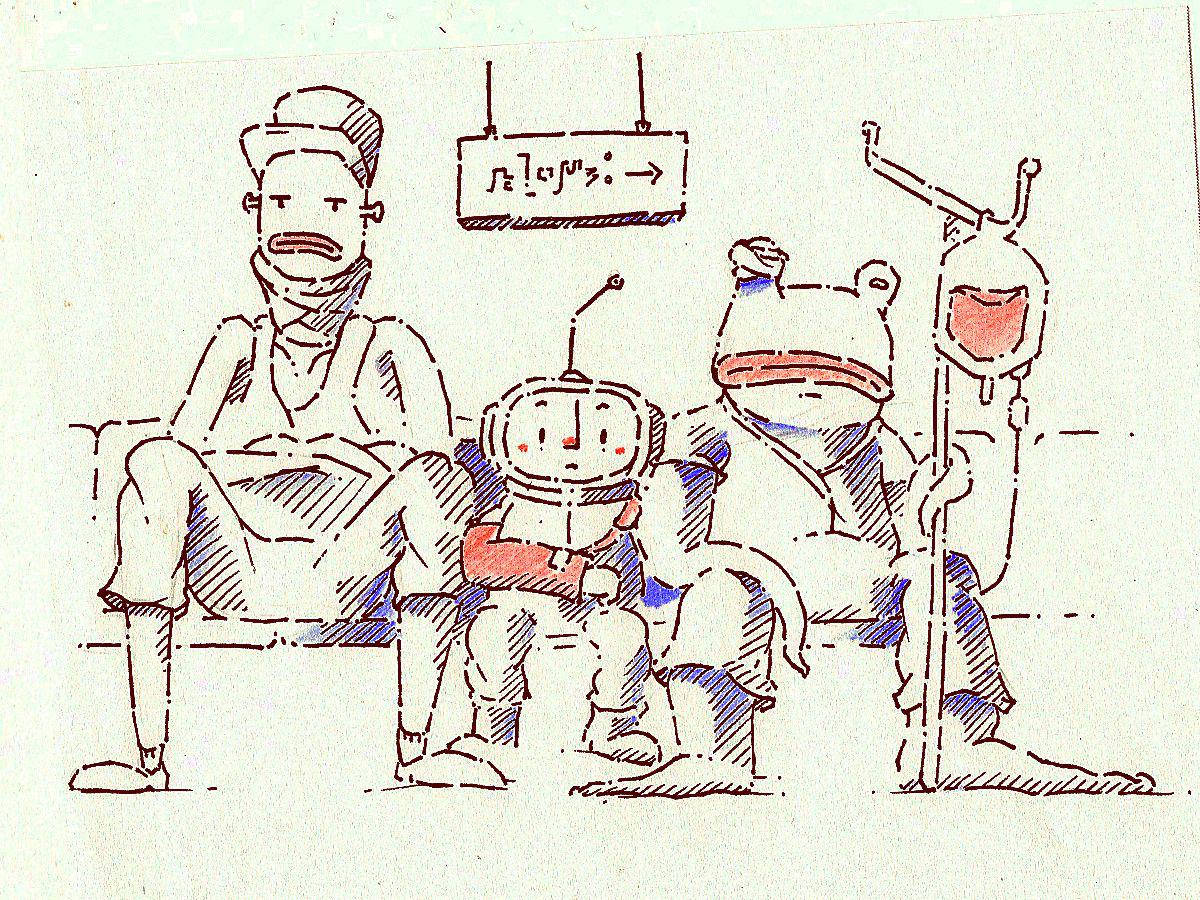 I didn't contextualize my uploads.

Lastly, when uploading my illustrations, I hard cropped them so there was no border. Last year, I put my drawings at a counter clockwise angle (because I'm cack handed), leaving the edge of the paper in view.

I really wish I'd giving more of an outward place to my uploads this year. Without any visible border, there's less of a sense that the drawings exist tangibly in the real world – which is what inktober is all about.

There's also less of an appreciation for how small the drawings are, which (admittedly) excuses some of the clumsiness. 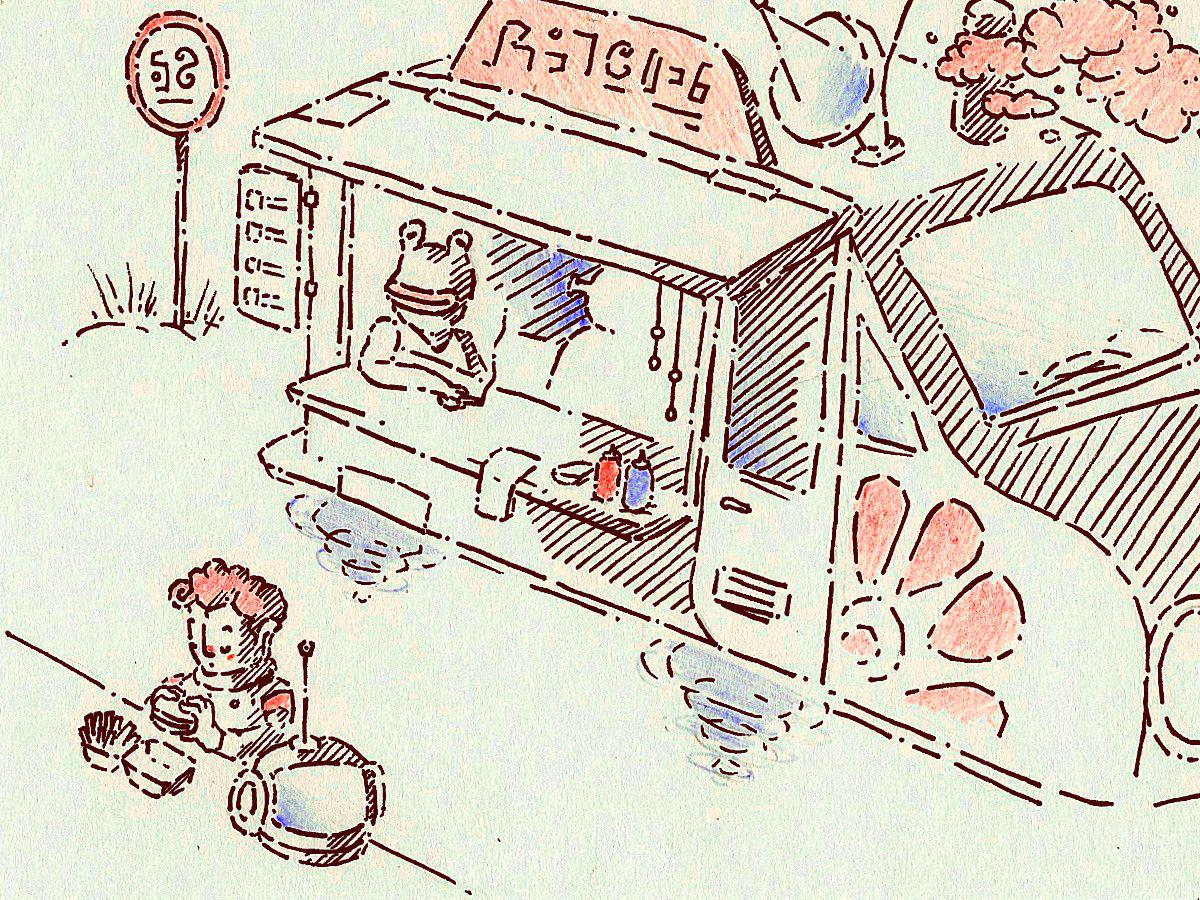 I wish I'd spent just a little more time preparing and thinking through how my uploads would look, as I did last year. Instead, I figured I could just pick up from where I left off last year.

Both years I've really enjoyed the small canvas, and small time frame. There are some inktober artists there who seem to drop incredible, meticulous artworks everyday, and it's easy to start comparing yourself against them.

What I'm most proud of is that my inktober's are unique. I didn't see any others that looked like mine. They exist within the boundaries I chose, and I like to believe only I could have drawn them.

So, with that all out the way, let's quickly compare a few that were most successful and less successful.

I thought I would compare the inktober's that performed the best and worst on social media, against which ones I'm personally the most and least proud of.

I would take the social media results with a large grain of salt. As I tell myself everyday, the internet is a fickle beast. There are so many variables, it's impossible to know that it's the image that made the difference. So this is just a bit of fun above everything else – something to scratch a curiosity.

I tallied up the likes on all the inktobers across twitter and mastodon (since Instagram works differently), while making some exceptions.

Almost without comparison, my very first inktober performed best, but this is largely because there's an initial rush of interest, and a want to be encouraging.

A couple of my inktobers were also picked up by much bigger accounts than my own (100,000+ followers) and so got a lot more exposure. While they did perform better than my other inktobers, it wasn't by a huge amount. It's difficult to know how they would have performed otherwise, so we'll forget them.

The least successful was #17 – Ornament. 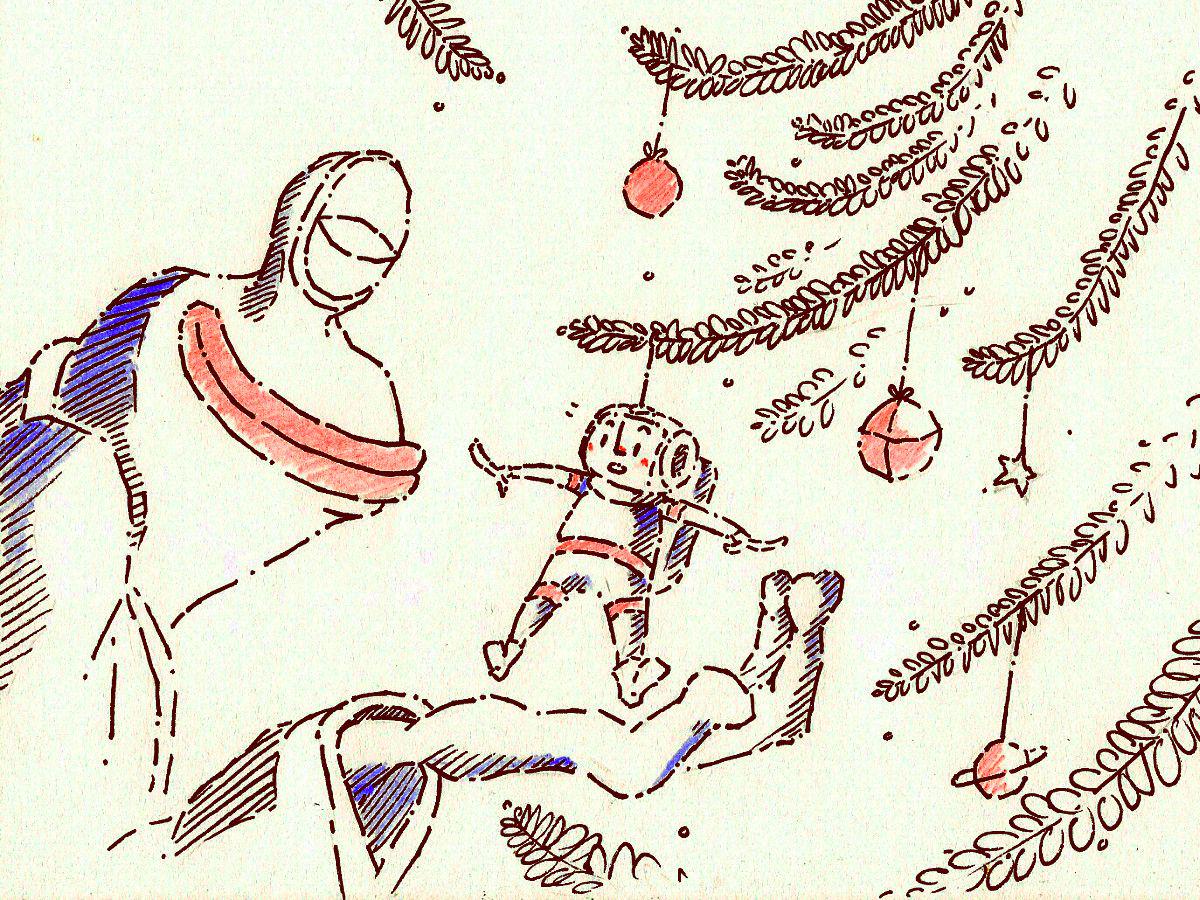 I remember illustrating this and chuckling to myself that it wouldn't do very well, and so this doesn't surprise me. The concept takes a bit of time to understand and digest (the alien using the astronaut as a tree decoration), but I also didn't do a terribly good job putting it across. It is, however, one of my favourites, for being a little unusual, and for my execution in illustrating the astronaut himself, and the ferns decorating the image (even if the composition is a little cluttered).

The most successful was #22 – Ghost 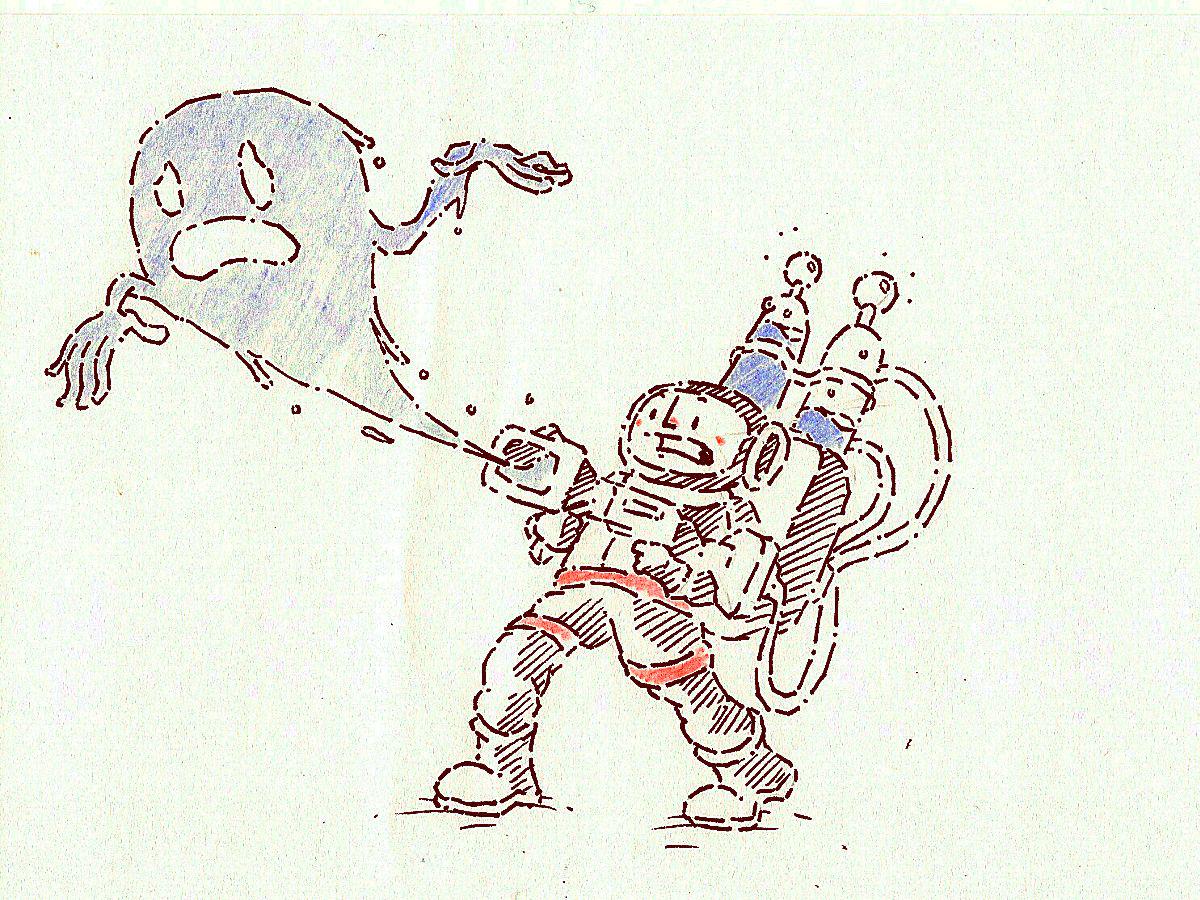 Even despite me accidentally crunching the paper while rubbing out the pencil lines.

I think probably because people saw a bit of Ghostbusters in it, a bit of Luigi's Mansion in it (which was being promoted at the time), and acted on that familiarity. I spent all day trying to think what I could do with 'Ghost', and eventually settled with what I think was a bit of a cliche. The execution is solid, with the ghosts creepy hands, and the astronauts ghost busting gear being particular highlights, but it ranks pretty low in my own opinion. 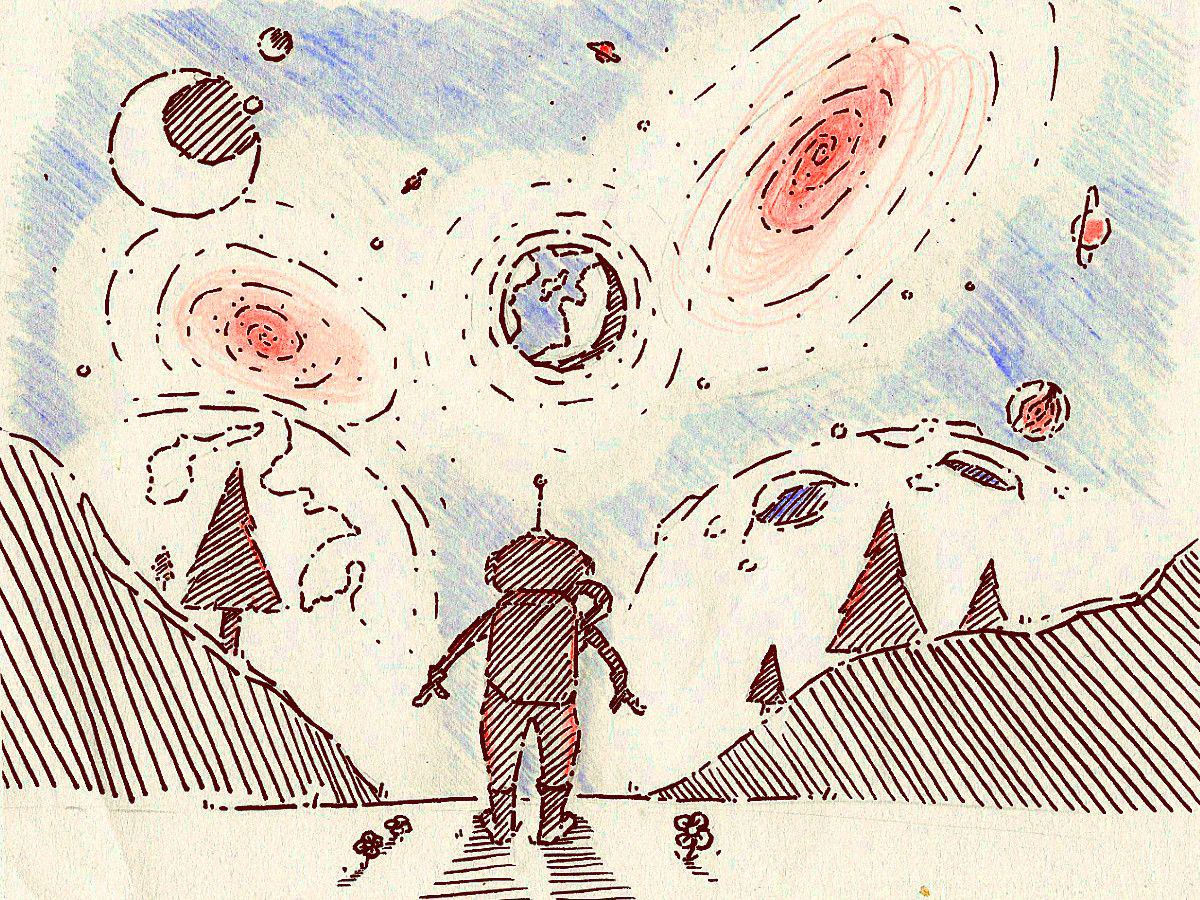 I was embarrassed to upload this one. I was in a very low mood after putting it up, and was endlessly eager to get my next inktober done and uploaded to bury it.

With a splash of irony, it ranks as one of the most well received, yet I can hardly stand to look at it. Nothing about this image challenged me, or showed off anything about me as an illustrator. There's no depth, it's flat, and each individual element is poorly executed. The hatching is off and inconsistent, and the colouring is little better than scribbles. Who knows why I decided to hatch shade the moons in the top left, and the red shading on the trees looks like a clumsy afterthought (which it was).

It is, in my view, my poorest effort across both years, although, I will say, I'm happy with how the craters on the moon turned out.

So, let's end on a positive note.. 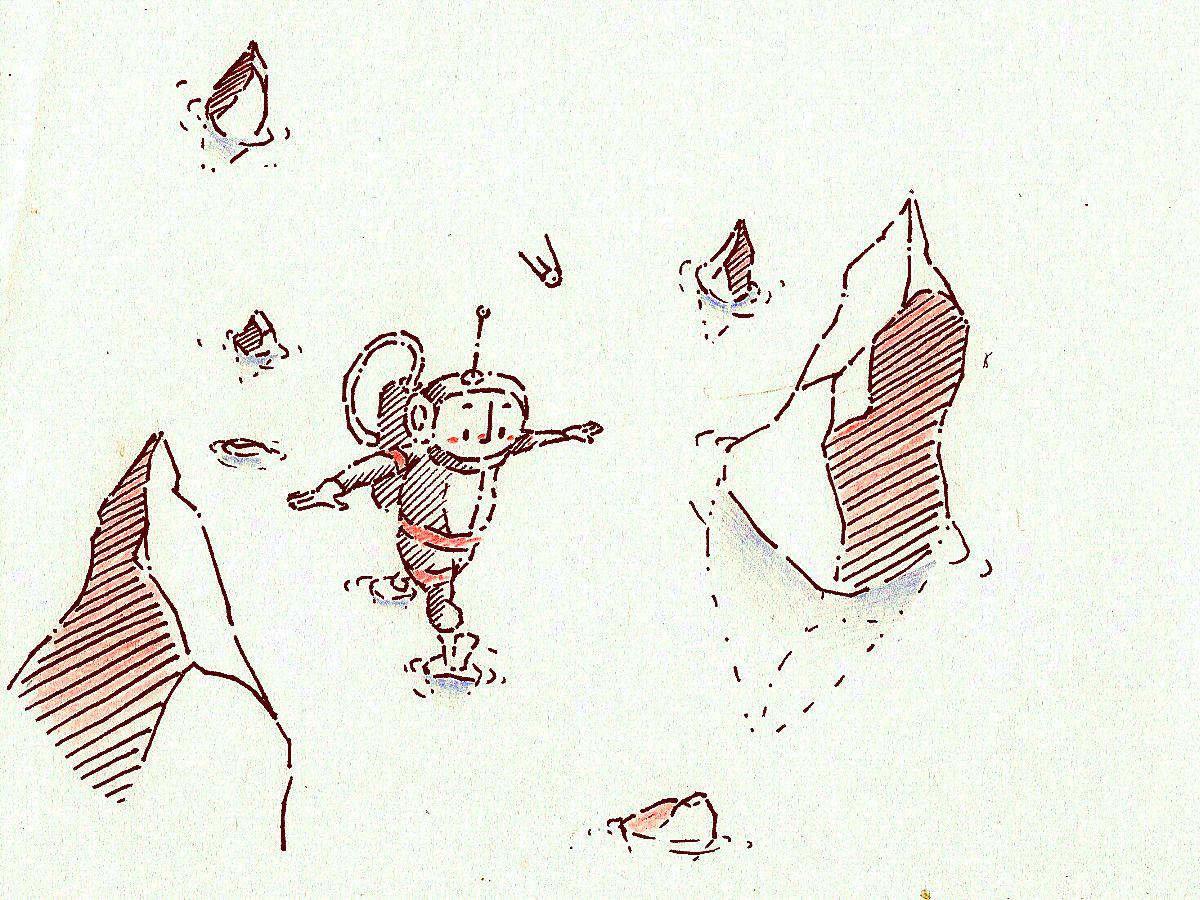 It's hard to say why I'm particularly fond of this one. It's just simple, and I captured each element well. It's difficult to make minor tweaks with ink on paper, so sometimes you get a good astronaut, sometimes you don't. It's an interesting angle, and the concept of floating shards acting as stepping stones is just strange enough to be magical without feeling too alien. You get the sense he's in another world, but that it feels familiar to him.

This was the point where I shifted how I used colour. Red is only used to highlight the astronaut and the red of the shards, while blue isn't used for shading, but to mark the shards submersion into the water. It's subtle, and I resisted the obvious choice to colour the whole image blue. Instead, the negative space works in its favour.

I think during both years I learnt, somewhere toward the middle, that simple images well executed often yield the best results. It's easy to start getting clever with the prompt, and try to come up with something that puts it on its head. Ultimately, the prompt doesn't matter, and the illustration should stand on it's own. The central character will always be what makes it unique, and the prompt is only that – a prompt.

The beauty of inktober is that it forces you to make certain decisions that you may or may not like, but by putting it out there, and encouraging you not to be too precious, you learn that different people might see something in an image that you never did, and may have never put out there.

So while it's great to return to traditional media (and ease off the habit to Ctrl+Z), it's really about the quickfire – getting acclimatised to the discomfort in knowing that everyday, whatever you draw, good or bad, you're putting something up.

31 days is probably enough, though. 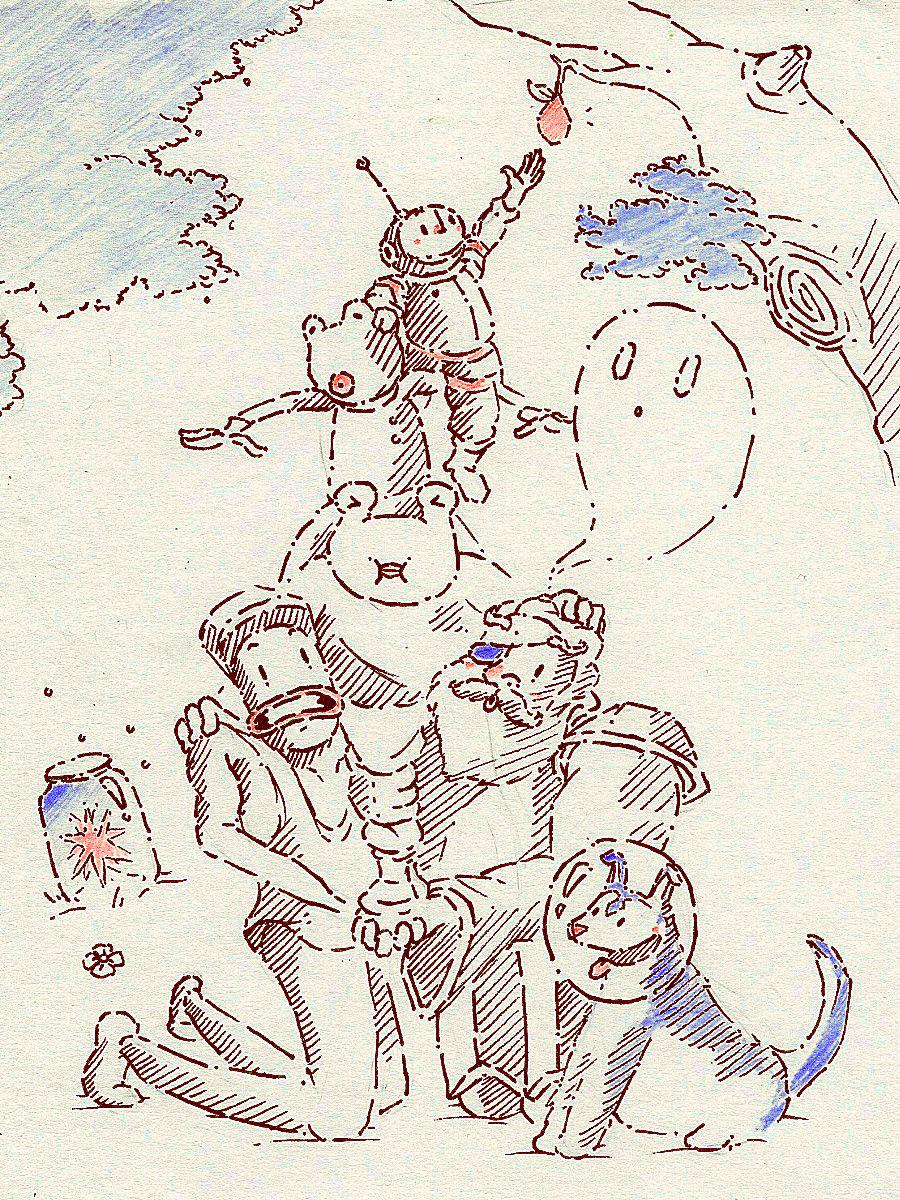